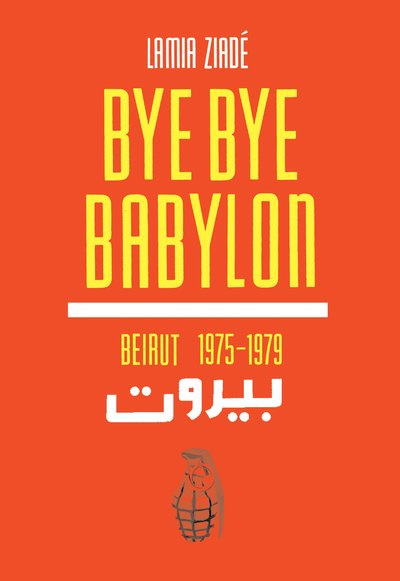 In 1975 I was seven years old, and loved the Bazooka bubble-gums my mother would buy for Walid and me in Spinney's supermarket...

Beirut in the 1970s is a paradise. Wealthy families ride escalators and fill shopping carts with imported food and luxury products from Paris and New York. Lamia Ziadé, seven years old, dreams of banana splits, American candy, flying on Pan Am Airways and visiting the local cinema. Considered by the elite the 'Paris, Las Vegas or Monaco of the Middle East', Beirut was in reality a powder-keg, waiting for a spark. On 13 April 1975 Lamia and her family returned from lunch in the countryside to find a city in flames.

Looking back on the golden days before the war, and its immediate, devastating effects, Bye Bye Babylon positions an elegiac and shocking narrative next to a child's perspective of the years 1975-79: of consumer icons next to burning buildings, scenes of violence and sparkling new weapons painted in vivid technicolour - war as pop.

It is both a lament for a home transformed by a destructive madness, and an inventory of the concrete objects of her childhood: the objects, details and fragments of memory which combine to capture the impossible reality of war. Part artist's sketchbook, part travel notebook and part family album, Bye Bye Babylon is a unique graphic memoir, and an important addition to the Cape list.