Aisling And The City 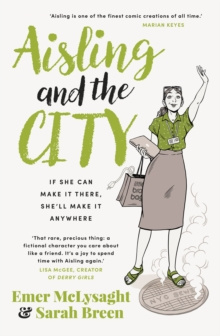 Pre-order the brand new, utterly hilarious and totally addictive romantic comedy from the No. 1 bestselling AISLING series Aisling is 31, and she's still a complete Aisling. With her cafe BallyGoBrunch flying and the door firmly closed on her relationship with boyfriend John, Aisling accepts an unexpected job offer and boards a business-class flight to New York in her best wrap dress and heels.

As she finds her feet in the Big Apple, she throws herself into the dating game, grapples with 'always-on' work culture, forges and fights for new friendships and brings her good wedges to a party in the Hamptons, much to her friend, Sadhbh's, dismay. But catching up with family and friends on WhatsApp and email is not the same as sitting in Maguire's putting the world to rights over mini bottles of Pinot Greej and a shared bag of Taytos. And yet New York has so much to offer, not least in the fireman department .

. . Praise for the Aisling Series:'There aren't enough words for how much I love it' Marian Keyes'The Irish answer to Bridget Jones .

. . it's stuffed with laughs' Daily Mail'Hilarious and heart-warming' Heat