Didn't Nobody Give a Shit What Happened to Carlotta 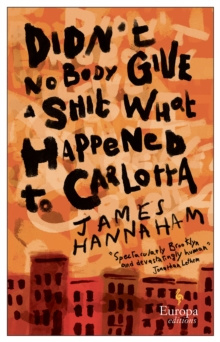 "An early contender for best title of the year." LITERARY HUBThe raucous, irreverent, and heart wrenching story of a transgender woman's re-entry into life on the outside after over twenty years in incarceration told over one whirlwind Fourth of July weekend. Following her involvement in a liquor store robbery during her youth, Carlotta Mercedes has been in a men's prison for twenty-three years. Now she has finally been released and is heading home to the newly gentrified Brooklyn, re-entering the orbit of her ambivalent son, and adjusting to life as a quasi-free woman, restricted by parole rulings and the hostility of contemporary New York.

Loosely inspired by James Joyce's Ulysses, Didn't Nobody Give a Shit What Happened to Carlotta is a stylish literary novel and an inventive tale of belonging. "Hannaham's prose is gloriously dense and full of elegant observations." ROXANNE GAY