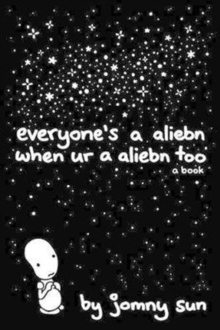 The illustrated story of a lonely alien sent to observe Earth, where he meets all sorts of creatures with all sorts of perspectives on life, love, and happiness, while learning to feel a little better about himself, based on the enormously popular twitter account. He also gradually improves his spelling. Everyone's a Aliebn When ur a Aliebn Too is the story of Jomny, an alien sent to study Earth.

Always feeling apart, even among his species, Jomny becomes determined to make friends among the animals he meets. There is a bear tired of other creatures running in fear, an egg struggling to decide what to hatch into, an owl working its way to being wise, a turtle attempting to learn camouflage, and many more. The characters are unique and inventive-bees think long and hard about their role in the hive, a Turkey helps Jomny make peace with the vagaries of life (right before Thanksgiving), and an introverted hedgehog slowly lets Jomny see its artistic insecurities.

It's also the story behind the widely-shared and typo-filled @jonnysun twitter account. Since the beginning, Sun intentionally tweeted from an outsider's perspective, creating a truly distinct voice. He can be funny: `"I hav cat-like reflexes' `prove it' `looks at cat' (instantly) `I like that cat'" Poignat: "When u die, they play u a recording of all the times someone said `I love you" to u and u didn't hear it." But usually, he's somewhere in between: "im like a onion.

Peel back the layers and u'll see that deep down inside im just a smaller more afraid onion." Now, that outsider has taken shape in the character of Jomny, who observes Earth with the same intelligent, empathetic, and charmingly naive voice that won over his fans on social media. The book is almost entirely new material, with a handful of thoughts and sentiments worked into the story, or used as jumping off points. New fans will find it organic, and old fans will delight at seeing the clever words that made them fans in the first place.

Through this story of a lost, lonely and confused Alien finding friendship, acceptance, and love among the animals and plants of Earth, we will all learn how to be a little more human.