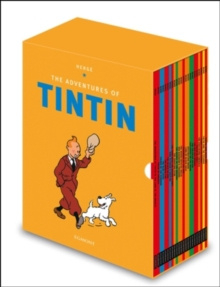 One of the most iconic characters in children's books For the first time, you can own all 23 stories in The Adventures of Tintin series in this fantastic boxed set. This is the perfect present for Tintin fans of all ages. Published to celebrate 90th anniversary of Tintin in 2019.

The complete set of The Adventures of Tintin, presented in a wonderful box set, ideal as a gift for any fan of the world's most famous travelling reporter. Stories included in the set:Tintin in the Land of the SovietsTintin in AmericaCigars of the PharaohThe Blue LotusThe Broken EarThe Black IslandKing Ottokar's SceptreThe Crab with the Golden ClawsThe Shooting StarThe Secret of the UnicornRed Rackham's TreasureThe Seven Crystal BallsPrisoners of the SunLand of Black GoldDestination MoonExplorers on the MoonThe Calculus AffairThe Red Sea SharksTintin in TibetThe Castafiore EmeraldFlight 714 to SydneyTintin and the PicarosTintin and Alph-Art Join the most iconic character in comics as he embarks on extraordinary adventures spanning historical and political events. Still selling over 100,000 copies every year in the UK and having been adapted for the silver screen by Steven Spielberg and Peter Jackson in 2011.

The Adventures of Tintin continue to charm more than 80 years after they first found their way into publication. Since then an estimated 230 million copies have been sold, proving that comic books have the same power to entertain children and adults in the 21st century as they did in the early 20th. Herge (Georges Remi) was born in Brussels in 1907.

Over the course of 54 years he completed over 20 titles in The Adventures of Tintin series, which is now considered to be one of the greatest, if not the greatest, comics series of all time.