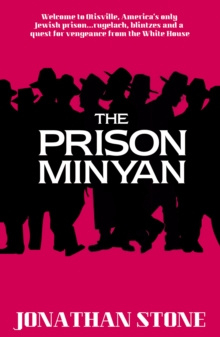 The scene is Otisville Prison, upstate New York. A crew of fraudsters, tax evaders, trigamists and forgers discuss matters of right and wrong in a Talmudic study and prayer group, or 'minyan', led by a rabbi who's a fellow convict. As the only prison in the federal system with a kosher deli, Otisville is the penitentiary of choice for white-collar Jewish offenders, many of whom secretly like the place.

They've learned to game the system, so when the regime is toughened to punish a newly arrived celebrity convict who has upset the 45th president, they find devious ways to fight back. Shadowy forces up the ante by trying to 'Epstein' - ie assassinate - the newcomer, and visiting poetry professor Deborah Liston ends up in dire peril when she sees too much. She has helped the minyan look into their souls.

Will they now step up to save her?Jonathan Stone brings the sensibility of Saul Bellow and Philip Roth to the post-truth era in a sharply comic novel that is also wise, profound and deeply moral.