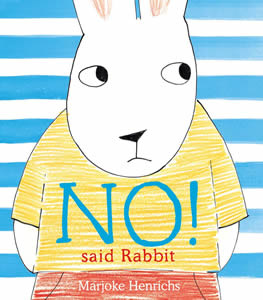 An everyday battle of wills between a mother and child where everyone ends up a winner!

Rabbit is happy doing his own thing, and he doesn't want to listen to his mum telling him to get up, get dressed, have breakfast, play outside, come inside and least of all... have a bath! NO, NO, NO! he says. But at last they hit on something they both love doing together.