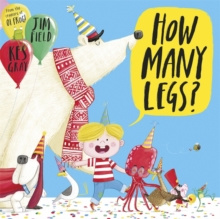 From the award winning creators of Oi Frog! comes an hilarious counting picture book about our four-legged - and two-legged and eight-legged - friends! How many legs would there be if a polar bear came for tea? How high would the leg count go if a squid rode in on a buffalo? As more and more animals join in the fun, count along if you can! Praise for Oi, Frog! also by Kes Gray and Jim Field: 'An absolute treat.' - Daily MailKes Gray is a bestselling, multi award-winning author of more than 70 books for children. He eats Ideaflakes for breakfast, spreads silliness on his toast and lives in a place called Different. Jim Field is a lead-driven, pencil-pushing, 25-frames-per-second Led Zeppelin fan.