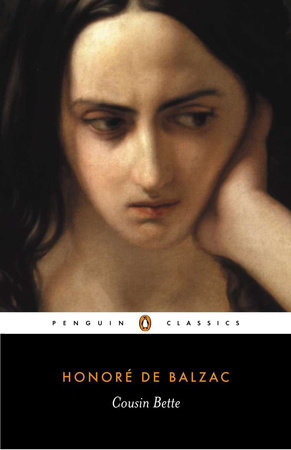 A gripping tale of violent jealousy, sexual passion and treachery, Honoré de Balzac’s Cousin Bette is translated from the French with an introduction by Marion Ayton Crawford in Penguin Classics. Poor, plain spinster Bette is compelled to survive on the condescending patronage of her socially superior relatives in Paris: her beautiful, saintly cousin Adeline, the philandering Baron Hulot and their daughter Hortense. Already deeply resentful of their wealth, when Bette learns that the man she is in love with plans to marry Hortense, she becomes consumed by the desire to exact her revenge and dedicates herself to the destruction of the Hulot family, plotting their ruin with patient, silent malice. The culmination of the Comédie humaine, and a brilliant portrayal of the grasping, bourgeois society of 1840s Paris, Cousin Bette is one of Balzac’s greatest triumphs as a novelist. Marion Ayton Crawford’s lively translation is accompanied by an introduction discussing the novel’s portrayal of rapidly changing times, as the new, ambitious middle classes replaced France’s old imperial ways.

For more than seventy years, Penguin has been the leading publisher of classic literature in the English-speaking world. With more than 1,700 titles, Penguin Classics represents a global bookshelf of the best works throughout history and across genres and disciplines. Readers trust the series to provide authoritative texts enhanced by introductions and notes by distinguished scholars and contemporary authors, as well as up-to-date translations by award-winning translators.