Investigation into the Comparability of Two Tests of English as a Foreign Language, An Paperback 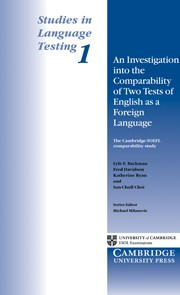 This book documents a major study comparing the Cambridge First Certificate in English (FCE) with the Test of English as a Foreign Language (TOEFL) to investigate similarities in test content, candidature and use. While both tests were designed to measure many of the same abilities, they represent radically different approaches to language test development, reflecting deeper differences between educational measurement traditions in the US and UK. The thorough investigation of the fundamental characteristics and operational utility of two of the most widely used English tests for foreign students makes this study a valuable contribution to language testing research. As such, it will be of considerable interest to language testing specialists and examination boards, as well as to academic researchers and graduate students in the field of language assessment more generally.    The only major study comparing approaches to language testing in Britain and the United States.  A comprehensive account of a number of important language testing reserach questions.  An important contribution to language testing research.