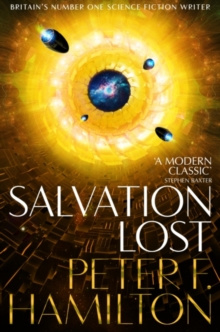 Humanity rises to meet a powerful alien threat, in this extraordinary sequel to Peter F. Hamilton's Salvation. This is a high-octane adventure from 'the most powerful imagination in science fiction' (Ken Follett).

In the twenty-third century, humanity is enjoying a comparative utopia. Yet life on Earth is about to change, forever. Feriton Kane's investigative team has discovered the worst threat ever to face mankind - and we've almost no time to fight back.

The supposedly benign Olyix plan to harvest humanity, in order to carry us to their god at the end of the universe. And as their agents conclude schemes down on earth, vast warships converge above to gather this cargo. Some factions push for humanity to flee, to live in hiding amongst the stars - although only a chosen few would make it out in time.

But others refuse to break before the storm. As disaster looms, animosities must be set aside to focus on just one goal: wiping this enemy from the face of creation. Even if it means preparing for a future this generation will never see.

Salvation Lost is the second book in the Salvation Sequence by Peter F. Hamilton'Everything readers of Salvation will have hoped for. A series emerging as a modern classic'Stephen Baxter 'Brilliant and compelling.

A masterclass in tension and spectacle'Gareth L. Powell